Torrance is situated in southwestern Los Angeles County, in an area commonly referred to as the South Bay, about 20 miles southwest of downtown Los Angeles. It is bordered by the cities of Lawndale and Gardena to the north; the Harbor Gateway district of the city of Los Angeles to the east; the cities of Lomita, Rolling Hills Estates, Palos Verdes Estates, and the Palos Verdes Peninsula to the south; and the the city of Redondo Beach and the Pacific Ocean to the west. The population of the city of Torrance was 145,438 during the 2010 census and is currently estimated at 147,478, making the city the 8th largest municipality in Los Angeles County. 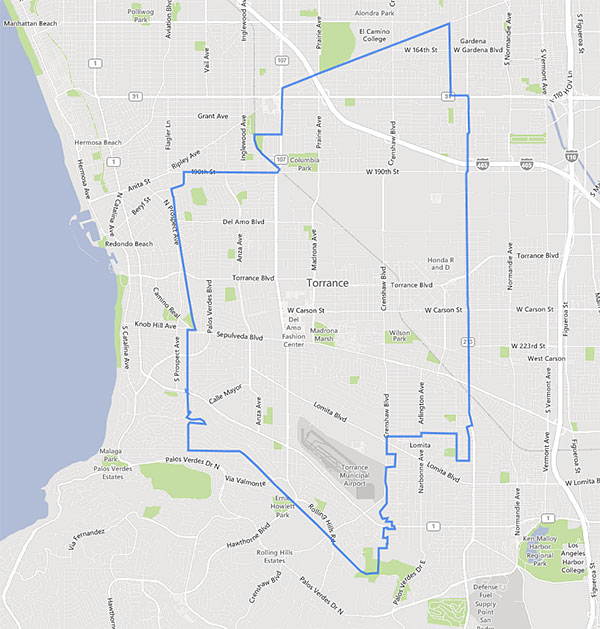 Torrance enjoys a mild Mediterranean climate with warm, dry summers and a rainy season November through March. Annual precipitation averages 14.7 inches. Due to the city’s location near the Pacific Ocean, a coastal microclimate creates temperature gradients of more than one degree per mile from the coast extending inland. As a result, Torrance can be notably cooler than areas to the east of the city during the summer, and warmer during the winter. Torrance is also subject to a coastal weather phenomenon called “May Gray” or “June Gloom” by locals, which frequently causes overcast or foggy skies and cool temperatures in the morning followed by bright sunshine and noticeably warmer temperatures by by mid-day. The warmest month is August, with an average high temperature of 79 degrees, and the coldest month is January, with an average high of 66 degrees.

Torrance is home to several major employers in the automotive, aerospace, medical, energy, and technology sectors. The city features an extensive selection of public parks and private recreational facilities. The city also offers one of the nation’s largest shopping malls — the 2.5 million sq. ft. Del Amo Fashion Center, which is currently undergoing major refurbishment and expansion.

Torrance encompasses a diverse assortment of neighborhoods and housing, with homes for sale ranging from relatively affordable condos and townhomes, to luxury homes exceeding $2 million. The current median sale price is $628,000 — slightly above the median sale price for greater Los Angeles.

I am a first-time home buyer and was referred to Shawn by my brother, who has used Shawn’s services several times already. I was already working with another lender, but my brother suggested talking to Shawn “just to see” if I had better options out there. Boy, am I glad I did. Not only did Shawn get me a better interest rate, but he also saved me a few hundred dollars off my monthly mortgage payment. He took the time to explain the pros and cons of his program vs the one I had been about to lock in with. My first conversation with him was pretty late at night but he was patient in answering all of my questions very thoroughly. He was also very accessible during and after the entire escrow process. I was very impressed with his service, personality and enthusiasm. He cares and it shows in how he goes above and beyond. I highly recommend Shawn because now I know he’s my lender for life! — review on Zillow.com

Shawn is a wonderful blessing! He really took the time to listen to my home-buying needs and provided options to those needs. He got me approved immediately so I could go house shopping. When I found a place, he got me through all the loan paperwork and closed. When we had bumps in the road, he found alternate solutions within the guidelines, always looking out for my best interest. He exhibits great integrity and character. I have already referred several people to him. Thank you Shawn for helping me get my new home – forever grateful! — review on Zillow.com