A borrower’s debt-to-income ratio (DTI) is one of the factors lenders take into consideration when evaluating a mortgage application for approval. At its simplest, the debt-to-income ratio is a comparison of a person’s debts with the income they have available to pay those debts. 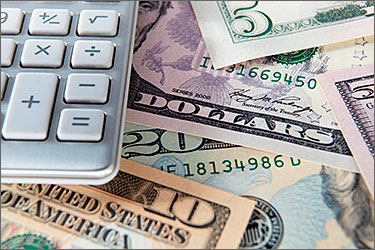 There are actually a few distinct types of debt-to-income ratios, but for mortgage lending purposes, two ratios are most relevant. The first is referred to as the front-end ratio. This calculation compares monthly gross income with monthly housing costs, namely, the projected mortgage payment. While the front-end ratio does not provide an overall picture of a borrower’s financial capabilities, it does indicate how much housing expense a borrower can generally afford.

The back-end debt-to-income ratio encompasses all recurring monthly debt payments in addition to housing costs. This includes health insurance payments, child support and alimony obligations, credit card debt, car and student loan payments, etc. A borrower’s credit reports are a useful starting point for tabulating current debts, but any other debts which do not appear on credit reports must be disclosed by the borrower.

If the borrower has an additional $750 per month in debt payments, the back-end DTI is 38% (2250/6000 = .375). The calculated debt ratios are typically expressed in a notation like “25/38” where the first number is the front-end ratio and the second number is the back-end ratio.

For conventional mortgages, most lenders look for a maximum DTI of 28/43

The current limits for most FHA loans are 31/43

VA mortgages take only the back-end ratio into account; the current limit is 41

For non-conforming loans, higher DTI limits are sometimes available, but these loans are much more difficult to come by than they once were, due to the tightening of credit standards in the wake of the subprime mortgage crisis of 2007 – 2009.

I recently had the pleasure of transacting business for a 2nd time with Mr. Shawn Carvin through a streamline refinance. Shawn saved me a substantial amount of money and gently walked me through the entire process from A to Z with explaining all the fine details. As before when he initially assisted me with my original mortgage, he was ALWAYS responsive to my e-mails, text messages or calls by either an immediate pick up or response or a very prompt follow up back if he was tied up in a meeting. I even sent him a text message on Memorial Day (of which I hated to do, but it was important) and he responded back promptly. Shawn has proved himself to me as being a man of great conscience and integrity over the multiple times now that I’ve worked with and trusted him in business. I strongly would recommend to anyone to transact business with him in trust. — review on Zillow.com

Shawn refinanced our home after 6 months in order to save the PMI on our loan which was in excess of $500 per month. Not only did he get rid of the PMI, he was able to lower our rate and save us a total of more than $600 per month on our payments. The process was made smooth and comfortable by Shawn, who was there for every step in the process. We again highly recommend Shawn to handle any mortgage financing needs you might have. — review on Trulia.com